The software, written by me (Norm Spier) for my own experimentation, supports looking at musical sounds, both live, and from recordings, via mainly spectrograms. This lets you look at both the fundamentals of musical sounds, and overtones.


It differs from some of the best similar software I've seen in that it adds various forms of aural feedback, so I've decided to put it out there for anyone interested to use.

The software does some very decent analysis on live sounds, but what it does on sounds from recordings (.wav) is much more extensive. 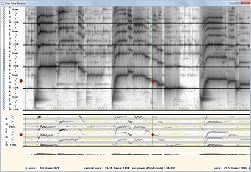 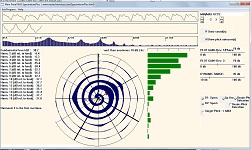 HERE IS A SUMMARY OF THE PROGRAMS SPECIAL FEATURES (applicable when looking at recordings from .wav files):

NOTE: Basic Spectratune (no-"Plus"): If your needs are limited to looking at LIVE (not recorded) sounds, your needs might be filled by my old Spectratune software, which this extends, and which has been around since about 2008. It has a simpler interface than this software. Here is a link to the old Spectratune: Spectratune Software.